Last October, Major Organizers opened its first franchise in Columbus, Ohio, under the direction of Melanie Woods. This month, we celebrate Melanie’s 6 month anniversary and shine a spotlight on this Ohio native and her passion for organizing.

Meet Melanie Woods and the Major Organizers Columbus Team
Melanie, a Central Ohio native, has been organized all her life: “We grew up in an organized household, but I’ve always loved being organized. Even before I became a nurse, I worked at the hospital as a Unit Clerk and took pride in keeping things running smoothly. When the nurses and doctors recognized my organization, I realized it wasn’t a trait that everyone naturally had. Being a nurse is nearly impossible without organization, so it was a natural transition.”

Married to her high school sweetheart, Bill, and raising their two boys, Aaron and Conor, Melanie felt like her career in nursing didn’t allow her to be “present” with her family, even when she was physically home. “I would be so excited for the weekend,” she recalls “but by Sunday at noon, I turned into an unhappy person, knowing that I was closing in on going back to work that didn’t fulfill me.” A self-described “helper,” Melanie knew she still wanted a career serving others, but didn’t know what that might look like.

A Life-changing Break
In May 2016, a broken wrist forced her to take time off from work. During her convalescence, she happened to catch the veterans episode of ABC’s “Shark Tank” featuring Major Mom, Angela Cody-Rouget. “It wasn’t an ‘ah-a’ moment exactly,” she says, “but a series of events building to an ‘a-ha.’ Healing from my injury forced me to take a break from what I’d always done, and gave me the opportunity to see what was possible. I’d always dreamed of opening my own business, and when I saw Shark Tank, I told my husband that I was ready to take the leap, and organizing was what I wanted to do.”

Serving Clients, Serving Columbus
Melanie became the first Major Organizers franchise owner in August 2016, and opened her doors for business in October. Since then, she has hired three Liberators (Professional Organizers) with a fourth ready to attend the Major Mom Academy™. The team serves clients across the Columbus Metro area – including Delaware and Franklin counties. Melanie is also a member of Faithful Organizers and the local and national chapters of the National Association of Professional Organizers (NAPO). Additionally, the company is dedicated to giving back to their hometown and has partnered with not-for-profit Common Ground Free Store, with plans to donate time and 10% of profits to the organization.

What Clients Can Expect When They Call Major Organizers Columbus
“The first thing every client should know about us is that we live our brand promise: We make organizing fun, we get the job done and we don’t judge anyone! Next, they should know that they can be as involved or uninvolved as in the process as they want, but in the end, we are dedicated to creating organized spaces that fit how that particular client lives in their home.

“If you want to call and are nervous,” Melanie advises “Visit MajorOrganizers.com which answers client FAQs and shows Before/After pictures of other jobs. If you still have reservations, reach out to our office to talk to a Liberator. We are always willing to answer questions and the free estimate can be performed over the phone if you’re not sure about having someone come into your home right away. Your mind will be set at ea se and you will be happy you called!

“Finally,” she concludes “I want clients to know that I love helping them find the peace in their homes again; the peace that comes from everything having a place.”

How To Get In Touch With Melanie
Are you ready to get organized and find the peace in your home again? Do you have a group that would benefit from a presentation by Major Organizers? Melanie and her team would love to talk with you!
Melanie Woods mobile: 614-570-6293
Office: 740-917-9105
Toll free: 1-“UGH-O-FREE-US” (844-637-3387) Ext 700
Website: www.MajorOrganizers.com/Columbus
Email:  ColumbusLiberators@MajorOrganizers.com 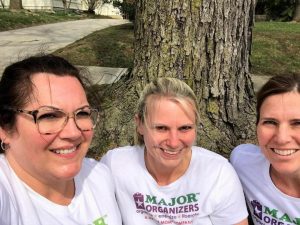 Get A Free Estimate Today!